Home > Reviews > Making an Impact on Policing and Crime

Making an Impact on Policing and Crime 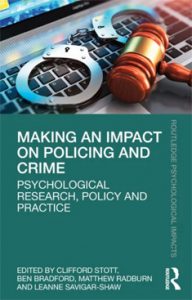 Especially in a book about 'impactful' research, it's unfair to single out chapters and overlook others, because that wrongly implies those focused on are better than others, whereas in truth so much is a matter of opinion and personal preference. Hence here the focus is on Prof Josh Davis and his work on super-recognisers - the psychology behind having a knack for recognising a face and putting a name to it, and creating teams of such super recognisers for identifying offenders.

Josh, and indeed former Met Police man Mick Neville, have separately spoken about super recognisers at Security TWENTY events; and a super recogniser practical test during a week's training course was featured in the November 2019 print edition of Professional Security magazine. As Josh says: "Unlike most research, in which attempts to transition to application may struggle to influence organisations that might most benefit, our super-recogniser research was driven by prior high super-recogniser ident rates." He rightly makes the point that identifying that someone has the skill is only the start - and it's of use well beyond crime prevention, for finding missing persons, and in business customer service for instance: how to train someone to use the skill, and develop it - 'systematic operational changes are necessary to ensure super-recognisers’ skills are effectively engaged', Josh writes.

The chapter is Josh's way of reviewing his work in the field since 2011. He writes that super-recognition is 'not amenable to training and does not fit standard HR and promotion models. For this reason, police forces are often wary of fixed-term funded projects initiated by academics. In addition, many people working within the criminal justice system have a natural aversion to the term ‘super-recogniser’. Outside policing and security, however, there are many opportunities for super-recognisers in which the recognition of infrequently encountered people might enhance job efficiency', such as in casinos.

Josh concludes by likening super recognisers to the sprinter Usain Bolts, in the cognitive world: "The skill may be innate, but super-recognition may need continued experiential tuning to sustain ability. How super-recognisers do this is still a mystery."

The background, from the book's preface, is that academic researchers are judged by their institutions in terms of 'impact' - which makes sense, in that academics in the social sciences ought to address what matters in the real world. As the preface says, there 'remains a fundamental tension between doing research that is highly relevant to, and suited for publication in, academic journals and at the same time working to overcome the theory–practice divide'. Except; how do you measure impact, and who says one thing is more 'impactful' than another? Each author's chapter in part is about their 'journey to impact' as the preface puts it.

Clifford Stott, a Professor of Social Psychology at Keele University, has featured in Professional Security magazine as the joint author of a study of English soccer hooliganism; and for the Staffordshire police and crime commissioner, a report on that county's football policing. Writing about the policing of crowds, his 'journey', as a 'protester and a researcher' began with the anti-poll tax demo in central London of March 31, 1990 that turned riotous. He notes that change and reform may be driven by politics - in this case of policing public disorder, the death of the newspaper on-street seller Ian Tomlinson in London in 2009.

As for lessons learned, is this about the application of academic theory, or 'driving progressive social change'? Stott's story of decades of research and influence - the researcher talking to and affecting the police whose work he is studying - does beg the question of what matters more, getting a write-up in an academic journal, or having 'social-identity–based crowd theory' used to 'underpin human-rights–based reforms to public-order policing', such as 'Supporter Liaison Officers' to manage soccer crowds, whether in the UK or on the Continent?

7  Procedural justice – the impact of a theory; Ben Bradford