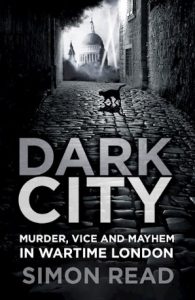 The perfect way to hide a murder would be to bury the body under the mountain of books about true crime and Britain in the Second World War. A book like Dark City, about wartime murder cases in London, is entering a highly crowded market. What does the author Simon Read bring that's at all new, for some of his stories are of the best-known and most notorious crimes in modern British history, such as John Christie and John 'Acid Bath' Haigh? And the Cleft-Chin Murder, as made immortal in the classic essay by George Orwell, Decline of the English Murder, as mentioned at the close of the book.

Despite the sub-title, Read has basically told the stories of five murder cases, from Metropolitan Police and Home Office files. Whether that satisfies you is a matter of taste.

On the plus side, you cannot beat a murder story; why else is so much said, and so many books published, about them, as celebrated by Orwell in that 1946 essay? Read tells the stories well, although at times they are not as well digested as they might be, the stilted language of police reports not being ironed out. Read captures the seediness of wartime in London, although he appears to have a shaky grasp of English geography beyond; for Ford in north Wiltshire (page 63) was not and is not a town.

On the minus side, you don't get any photographs, and don't get much more than what was in the files, although Read does note the tremendous interest in crime, as analysed by Orwell in his essay. Read offers little from newspapers of the day, notably a letter to the press by the playwright George Bernard Shaw, about the young woman, Elizabeth Jones in the Cleft-Chin Murder being sentenced to death (later she was reprieved). By sticking to the police files we don't get much sense of what public opinion made of crime.

Nor do we get much social history. The accomplice of Jones, who actually did the deeds, Karl Hulten, was an American deserter. It's easy to assume that wartime - the stretched police, short of officers as many went into the forces; men trained to kill and with time on their hands when not on duty and on overseas service; the dislocation of wartime added to the anonymity of the city - made for more crime. But did it make people more likely to do murder? The book doesn't delve into such questions. For answers, you would be better to turn to Underworld at War: Spivs, Deserters, Racketeers and Civilians in the Second World War, by Donald Thomas, one of a trio of books; or Wartime by the social historian Juliet Gardiner.

In this book you do get an insight into police work before the electronic age of CCTV; instead, for one crime detectives simply had to sit in cafes in the area of the crime and listen in the hope of overhearing a lead; as they duly did. On the other hand, the Met Police were already routinely using and benefiting from forensic science.

Any implication that London was a 'Dark City' or more violent crime-ridden due to the coarsening of life in war does not really stand examination, as some of the criminals went on after the war; and did their crimes for the same sordid reasons as in peace; personal gain, or even more dismally, without much apparent reason at all, as deplored by Orwell in his essay.