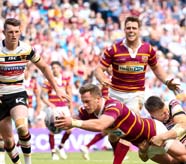 Rugby league’s Super League enjoyed record attendances for the two-day ‘Magic Weekend‘ of matches at the Etihad Stadium, at the home of Manchester City Football Club. The Premier League champions and ‘the Magic’ were stewarded by the contractor Showsec.

It was, then, appropriate that Warrington Wolves rounded off Magic Weekend with a victory over local rivals St Helens in the last of a full round of Super League fixtures as Showsec are now providing their stewarding services at Warrington’s Halliwell Jones Stadium.

Alan Wallace, Showsec’s Regional Manager for the North, said: “The success of Magic Weekend comes on top of the fact that we have had some excellent feedback from our initial work with Warrington Wolves this season, all of which helps us to raise awareness in rugby league. We consider sport in general to be a key growth area for the business moving forwards and this gives an excellent platform on which to develop our presence in rugby league.”

A record attendance of more than 64,000 rugby fans over the two days left organisers hailing it the best Magic Weekend so far as the event grows in popularity. There were a number of factors, most notably the good rugby, the carnival atmosphere and the fine weather as the sun shone from start to finish. Graham Herbert, Showsec’s Operations Executive who was Head of Security for the rugby league spectacular

Herbert said: “This is the third year that we have done Magic Weekend at the Etihad and each time the sun has been shining. When you have an occasion like this, which is essentially a big party to celebrate all that is good about rugby league, then it makes all the difference if you have the right weather because it puts everyone in the right frame of mind. This was another record year in terms of attendances, especially on Saturday when we had over 36,000, and what was noticeable too was that supporters stayed right through to the end so the crowd built up as the day progressed.”

Herbert added that the biggest challenge at such an event was the movement of the teams, rather than controlling the good-natured crowd. “There was a real party atmosphere with lots of families, many in fancy dress and fans of different clubs mingling with each other. At any one point though, you could have six teams at the stadium with the four dressing rooms and the warm-up area as well. So you needed to have eyes everywhere, although it’s still probably easier than football because the profile of the players are not on the same scale as the Premier League stars, so there are not the pressures when it comes to contact with the fans.”

And talking of football, Showsec had almost 400 staff on duty across the city for Manchester City’s league victory parade which began with a stage appearance in Albert Square in the city centre before the open-top buses made their way through the packed streets along the one-mile route to Exchange Square. The two buses which carried the City squad to that final destination were kept within a Showsec ‘bubble’ in which 50 of the staff were deployed.

The operation was headed by the Area Manager for Manchester Mark Wilcock in his capacity as Head of Crowd Management, while Operations Executives Carl Symes and Jon McDwyer were responsible for the logistics and project management.

“It really couldn’t have gone any better from our point of view, especially when you consider the amount of time we had to prepare,” said Wilcock.

“Whereas we usually have two to three weeks to plan for such a parade, it was only a week in this instance due to the late twist in the title race and the need to stage it before the squad flew out to Dubai for an end-of-season tour that evening.

“You normally expect on these occasions for there to be a last-minute hitch or a change of plan, but it all ran very smoothly from start to finish.

“As you can well imagine for such a celebration, there was a great atmosphere all the way along the route and everyone was extremely well-behaved.

The timing of the celebration meant that Showsec had worked with Manchester City Council, Greater Manchester Police and representatives of the Football Club on contingency plans as the Premier League title race moved into its final stages.

And the crowd security contractor company had 600 staff on duty for the Gunners’ FA Cup victory parade as three weeks of planning for the event kicked in once Arsene Wenger’s side had clinched Arsenal’s 3-2 win over Hull City after extra-time.

An open top bus parade carried the Arsenal squad from the Emirates Stadium along packed streets to Islington Town Hall for a civic reception. They then returned to the stadium where the players showed off the famous piece of silverware once again from a balcony above the armoury.

Sharon Cicco, Arsenal’s Event Safety and Security Manager, described the partnership between Showsec staff and the club’s stewards as “fantastic”. She said: “The interaction between your stewards and ours was excellent. Both worked very well together on the parade and at points along the route. From my point of view as Operational Event Manager for the stadium event, I was very happy and extremely grateful for Showsec’s support throughout the project.”

Showsec’s day had begun six hours before the 11am start of the parade as many staff were deployed to man barriers either side of the 2.5km route in north London.

It was the first time the company had worked with Arsenal on such an event and the first time such a celebration had started out from the Emirates, as Arsenal had gone nine years without a trophy.

Paul Legge, Showsec’s Area Manager for London East, was Head of Security for the occasion. “Everything went extremely well, considering that it was only a matter of hours between the end of the final and the start of the parade. I think I walked that route half a dozen times to check everything was in place before the parade got underway, but it was well worth it.

“All the estimates for the size of the turnout proved to be spot on and probably the biggest concern in those circumstances was that it was such a hot day, so the staff did a fantastic job in distributing water to people along the route.”​

And last but not least, the open-top bus parade to mark Leicester City Football Club winning promotion to the Premier League was the first major event at which Showsec were on duty as part of a new contract with Leicester City Council. More than 35,000 supporters packed into the streets of Leicester to salute the Foxes’ squad as they paraded the SkyBet Championship trophy through the streets. They made their way from the top of High Street down to Town Hall Square for a civic reception before returning to the buses for the journey out of the city centre.

Joe Milner, Showsec’s East Midlands Area Manager, said: “It was a fantastic occasion and a fitting one after such a memorable season for the club. It seemed like the whole of Leicester had turned up to celebrate the success and the biggest challenge from our point of view was managing the flow of people. It was quite apparent there were a lot of families in the crowd, so there was a tremendous atmosphere and everyone seemed to have a wonderful time.”

Such a big occasion meant that Leicester-based Showsec had 150 staff on duty for the open-top bus parade which took place between 2pm and 4pm.

The planning of that procession meant Showsec staff started at 6am, implementing road closures in and around the parade route and were then in control of crowd management throughout the celebrations.​ 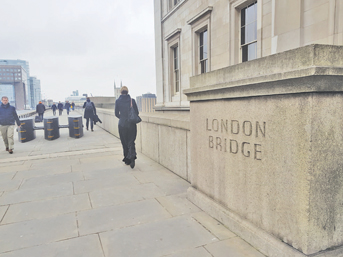